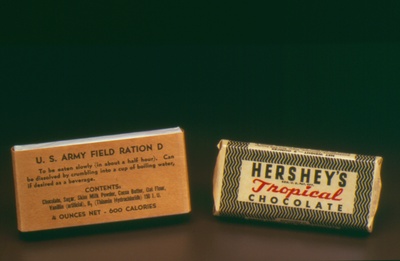 In 1937, the US military approached the nation’s largest chocolate manufacturer, the Hershey Chocolate Company, with a request to make an emergency ration bar fitting specific criteria. Each chocolate bar, which came to be known as a ‘D-ration,’ had to weigh 4 ounces (112 g), have high energy value, withstand high temperatures, and taste “a little better than a boiled potato” to keep soldiers from eating them for pleasure or during non-emergencies. Company founder Milton Hershey welcomed the military’s chocolate challenge, despite his pacifist upbringing and influences. Once a small batch was approved by military officials, 90,000 foil-wrapped D-ration bars, packaged in three’s and amounting to a day’s worth of calories, were ordered and field tested in the Philippines and elsewhere. But the hard, dense slabs were not popular among troops, and orders for the product were irregular until the 1941 attack on Pearl Harbour, after which requests for D-ration bars, packaged in boxes with a special anti-poison gas coating, rose dramatically. The Hershey Company made a killing, selling more than a billion ration bars to soldiers around the world. In 1945, the same year Milton Hershey passed away, D-ration bars were discontinued (soldiers disliked them, nicknaming them ‘Hitler’s Secret Weapon’). They were replaced by better-tasting Hershey’s military chocolate such as the Tropical Bar. Sweet “comfort” chocolate for non-emergencies continued to have an important place in soldiers’ rations, and still do today. 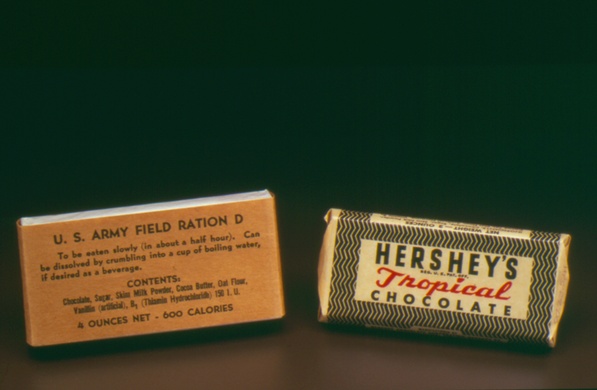