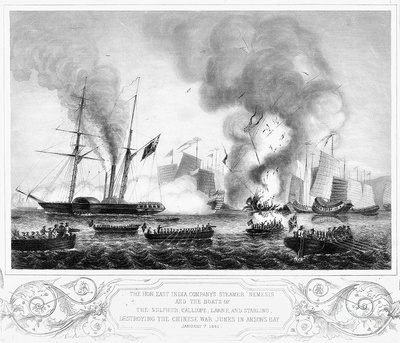 In 1839, China demands the handover of all opium and demands all foreign traders sign a bond making them subject to Chinese law if they are found to be involved in the opium trade. Initially the British refuse to hand over any opium but, in the end, are forced to give up thousands of chests of opium that are confiscated and destroyed by the Chinese. Refusal to sign the bond results in China threatening to close all trade with the British and in the expulsion of the British traders from Canton.

Major debate rages in England pitting representatives of the opium traders (“Big Opium”) against the anti-opium party that argued for China’s right to suppress a pernicious trade. In the end the hawkish policy of the ruling party wins out and Britain prepares for war. Meanwhile, a few traders who do not deal in opium are prepared to sign the bond leading to the first skirmish as British warships try to stop British traders from defecting from the official opposition to the bond.

The British government sends modern military forces against the antiquated Chinese military. This results in the destruction of a Chinese blockade on the Pearl River and the occupation of the city of Canton. The fighting ends with the capture of Nanking in August 1842 and the signing of the Treaty of Nanking ceding Hong Kong to Britain and granting the British open access to Chinese ports. Among all the terms and conditions, no mention was made of opium. Officially the opium trade was still illegal; in practice it was still big business.

In 1844, China also establishes treaties with the USA and France giving them certain trading rights and allowing them to engage in religious and cultural interaction with China.


The term "Silk Road" was coined in the 18th century. It describes a series of interconnected routes that ran from Europe to China, crossing many countries in between. These routes developed between different empires on the Mediterranean coast (Persia and Syria) and in the East (the Indian Kingdoms). At the end of the Middle Ages, the routes went even further, stretching from Italy to West China, and to Scandinavia in the North. Many products were traded along these routes, including opium.  As the power of opium became known, demand for it increased, leading to its cultivation in many countries. Cultivation spread along the Silk Road, from the Mediterranean through Asia and finally to China where it was the catalyst for the Opium Wars of the mid-1800s.


The Treaty of Nanking created more problems than it solved. Chinese resentment simmered for a long time and boiled over in 1856. Hostilities started when Chinese soldiers arrested the Chinese crew of the Arrow, a Chinese built and manned trading ship that had been registered in Hong Kong as a British ship and flew the Union Jack. Despite the fact that the British registration had lapsed, the British used the incident to justify retaliation. Thus began the second opium war. The British began bombarding Canton in December 1856, and the Chinese retaliated by burning foreign trading factories, which escalated the tensions even more. The British opium merchants wanted to force China to accept free trade in opium, and Admiral Seymour, Harry Parkes (acting British Consul in Canton), and Sir John Bowring (Governor of Hong Kong) were itching for a fight. But they needed more troops. Again debate raged in the English parliament about the legitimacy of defending the opium trade, and again the war party prevailed. Lord Elgin, who had been Governor-General of British North America at age 35, is sent to China to command the troops and resolve the issue. While Elgin is committed to a negotiated settlement, the British and French amass troops in the area, and when negotiations fail the shelling of Canton begins on 27 December 1857. After a messy period of war and negotiation, the European forces completely overpower the demoralized and poorly equipped imperial forces of China. On 18 October 1860, British and French troops enter the Forbidden City in Peking and Prince Gong is forced to sign the Convention of Peking. This unequal treaty ratifies earlier treaties and legalizes the importation of opium to China and opens the country to foreign commercial practices and Christian missionaries. 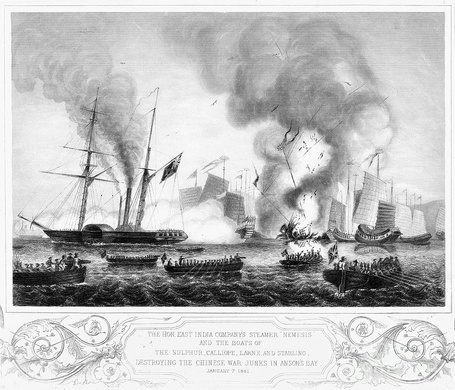 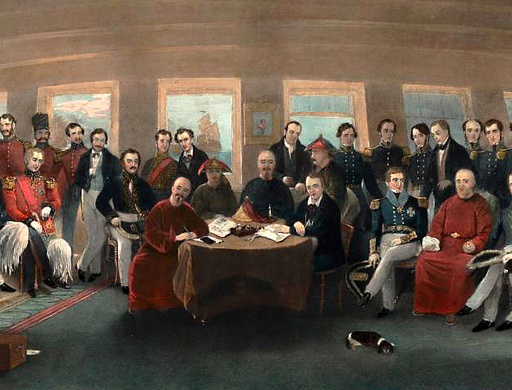 The signing and sealing of the Treaty of Nanking, 29th August, 1842.
Previous Next